Learn more about the eBook

Ever wondered what freelance life is actually like in the real world? Well, with this book you can learn from a pro freelancer who's learned things the hard way, so you don't have to!

That pro freelancer is Thomas Davis: a motion designer who’s spent almost his entire working career as a freelancer. Like so many others, Thomas took the leap into freelancing without truly knowing the reality of what would be involved. The result? He’s had to learn a lot of freelance lessons the hard way.

This book is the culmination of Thomas’s years of experience freelancing the hard way. It is a practical, honest, realistic view of what freelancing is like in the real world. It's a guide to help other freelancers avoid making the same mistakes.

Whether you’re new to freelancing, an established freelancer, or interested in becoming a freelancer in the future, this book will give you the heads up you need to navigate freelance life.

Learn more about the eBook

If you’re interested in finding out more about what freelance life is actually like then this book is for you.

Learn more about the eBook: 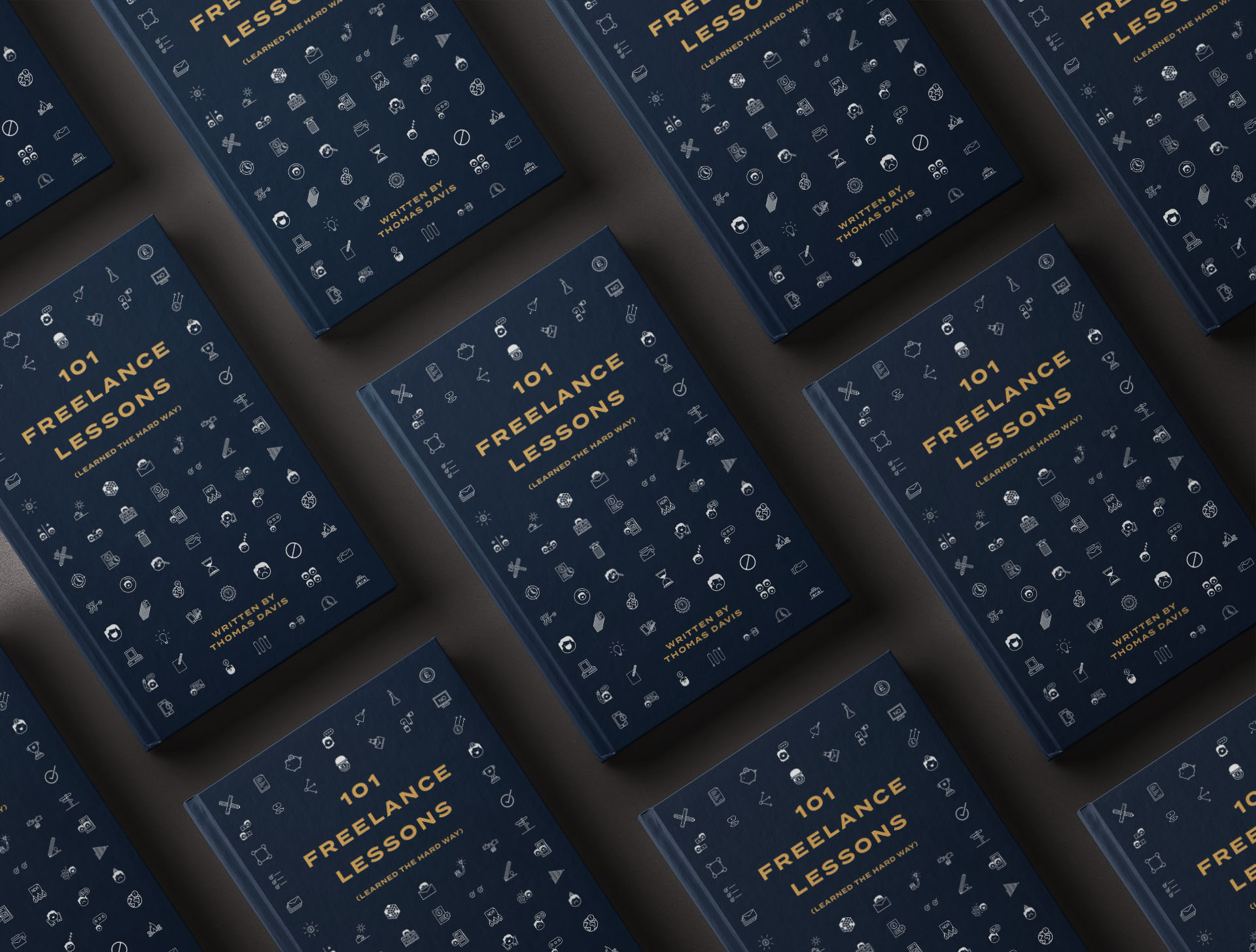 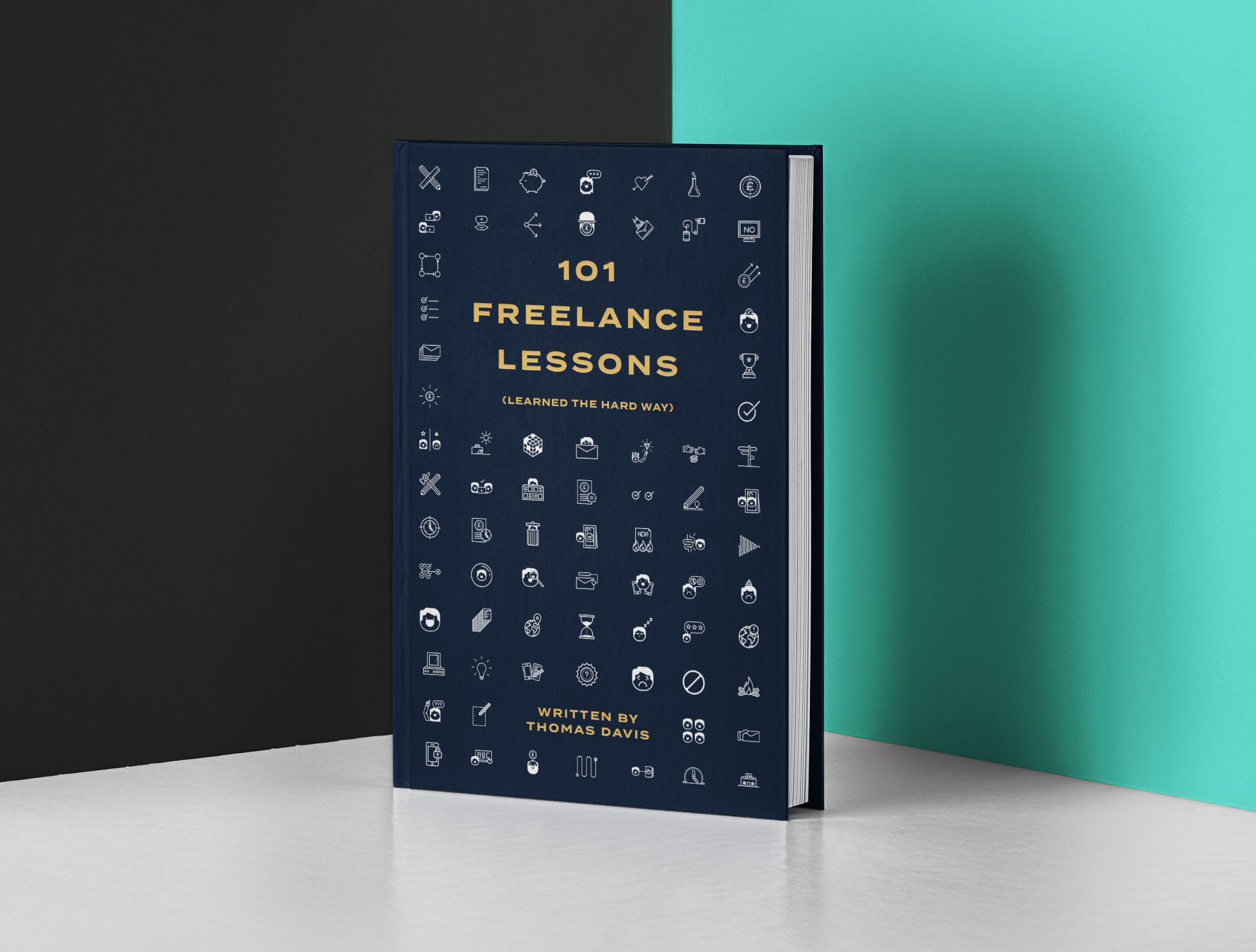 What people are saying about the book

"Such a useful book, full of specific reflections from Tom's own career whilst being applicable to freelancers at every level. It almost feels like it's a diary that has been abridged into lessons. Tom has really injected his own personal experience into it which makes it so rich!"
- Patrick Gallagher

"If this book had been on hand when I first started out I could have saved myself days of non-productivity, creative block, nights of sleeplessness, and had the confidence to just believe in myself. Seriously, stop reading my review and buy the book!"
- Sean Monaghan

A little more about the eBook

101 Freelance Lessons Learned the Hard Way is a first-hand account of what freelance life is like in the real world. It's a guide designed to help other freelancers prepare for the challenges freelancing can throw their way.

If you're an established freelancer already, this book should offer some welcome cathartic relief too, and who knows there may be a lesson or two in there that you're yet to learn as well.

Thomas Davis is a freelance motion designer based in Manchester.

With over 13 years experience, Thomas has built up a successful freelance career working both as an extra resource for agencies and directly with his own clients.

Among his own client list, Thomas has been fortunate enough to create a variety of animated content for a whole host of clients, including: The Guardian newspaper, and The NHS.

Alongside his freelance work, Thomas also created this very website, Made by Loop, and the resources contained within it. The overall goal of Loop is to help other motion designers and freelancers save time and it's this sentiment that's been the driving force behind writing 101 Freelance Lessons Learned the Hard Way.

Sample Lessons from the book:

If you deal with client feedback as part of your freelance profession then I’m sure you’ll have experienced this at some point: you’ve spent hours on a particular idea or piece of work, painstakingly making sure it’s the best it can be and then BAM! The client completely dismisses it and wants a new approach.

Whenever this happens to me it’s genuinely akin to getting punched in the gut, it’s an almost instant visceral reaction that for a long time I had a hard time dealing with, I still do.

What I've come to realise though, is that although a client may not like a piece of work or idea I’ve put forward: it doesn’t mean that idea is a bad one, it’s just not quite right for this particular project.

It’s an important distinction because if you treat every bit of feedback as a personal attack on your skills and abilities then this can quickly spiral into a feeling of self doubt about all the work you’re producing.

Instead of dwelling on negative feedback try to move past it and get to work on a new idea, you still might think it’s not as good as the original but ultimately that’s the client’s loss, not yours.

When I’m freelancing for agencies rather than direct clients, usually what happens is they’ll request to book me for a set number of days at a set rate per day. All pretty standard stuff.

There are occasions however, where I’ll finish all the work set out for me before the set number of days are up, leaving me with nothing to do for the remaining time.

As a fledgling freelancer, whenever this situation came up I’d just bill the client for the days worked, rather than the days booked, I assumed that was the way it worked. The more this happened though, the more I realised that actually, the client will have set aside a budget to book me for that number of days, and if I came in under that, they’d just pocket the remainder and I’d be left scrambling to try and book something else in to fill the time slot which, at such short notice, is nigh on impossible to do. I realised that I was the only one losing out because of my own productivity.

To help protect against this issue nowadays, I’ll always explain to the client that for scheduling purposes: as soon as a booking is confirmed, all days are then billable. Mentioning this ahead of time ensures everyone is on the same page should the situation arise, and it means I won’t be left out of pocket should the booking end earlier than planned.

As someone who’s worked in design for a fair while now I’m no stranger to frustrating situations. The seemingly innocuous phrase “Make the logo bigger” is enough to make even the most zen designer boil over and flip the nearest table.

No matter how frustrating a situation is, no matter how much I want to instantly reply with a list of why something is a terrible idea, it’s important to do one thing first: cool off.

If you find yourself in a rage, there’s nothing to be gained from writing an email while you’re in that state of mind, it will only exacerbate any issues that are there and cause further problems down the line.

Instead, a useful trick I’ve learned is to close the email window and instead open up a blank document. Write down your response in the document, let your frustrations out (like listing the 101 reasons why a logo shouldn’t be made bigger), and then close the document and walk away from your screen.

Take a break, do something completely different and step away from the situation before doing anything too hastily, you’ll only regret it further down the line. Sending an email in rage mode is never ever productive.

The business of motion design goes far beyond After Effects and animation programs. Our collection of business resources for motion designers are designed to help with the admin side of motion design, like making a motion design proposal, as well as helping with the creative side of things like how to write an explainer video script.

You may also be interested in our After Effects Scripts

Save time in motion with our selection of scripts for After Effects! Ideal for boosting your motion design workflow.

Much like our presets, our After Effects scripts are great for saving time and effort in your motion design projects.

All After Effects Scripts