Avoid confusion and help limit the dreaded scope creep with a clearly defined statement of work.

The template helps you set out the stages of the motion design process, what the deliverables will be for each stage, and the rules regarding feedback and changes - making sure everyone's on the same page right from the beginning. Also available as part of the motion design business starter pack.

All our templates are Adobe Illustrator files, allowing you to save them as a PDF to send to your clients. 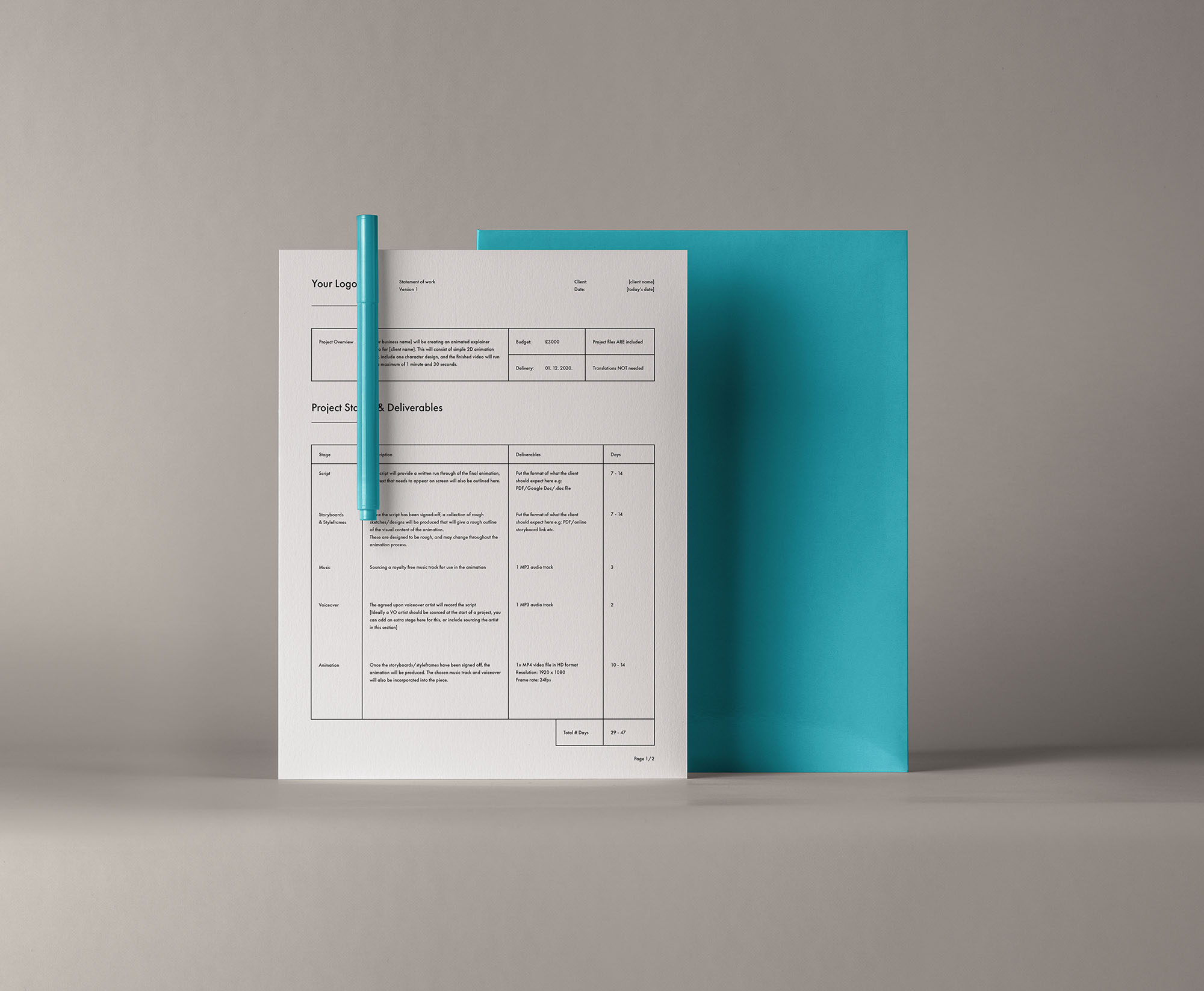 Why a statement of work is important

A statement of work is vital in any motion design project as it helps both parties see exactly what work will be done in the project. The statement of work removes any ambiguity about the work you'll be doing and what the client can expect in terms of deliverables throughout the whole process.

Writing a statement of work is actually a great way to start any project, it gives you the chance to sit down and plan out exactly what needs to be done. It's a sort of checklist for the work you're about to do and can help you fix problems before they arise.

Let's say you need to provide a square version of the animation at the end of a project for example, with this in mind right from the start of a project you can tailor the design and animation to make that conversion process easier.

It can also help highlight things that have perhaps been missed in the initial project talks, will the video need to be translated for example? Or will the client need to provide anything before work can begin? Catching these issues early makes for smoother sailing further down the line.

A good statement of work can also help raise any red flags early on in a project before work has even begun, because it helps clarify exactly what's going to be done. Let's say the client had expected 3 different versions of a storyboard for example, if the statement of work clearly defines one version as a deliverable then this will help set their expectations correctly, avoiding conflict further down the line.

What's included in the statement of work template?

The statement of work template has been specifically designed for motion design and animation projects.

By default it includes the usual main stages and deliverables for a typical motion design project from start to finish: The script stage, Storyboard stage, Music sourcing, Voiceover, and Animation.

Of course the template allows you to add in custom stages and you're not limited to the above list whatsoever, this just covers the bases for a typical motion design project.

The statement of work template also includes a paragraph on how changes will be handled throughout the project, splitting amends into minor and major categories (as decided by you the designer), and also outlining the process for what happens if the statement of work needs to be updated. Having this in writing from the start ensures everyone is on the same page.

The statement of work template also includes a signature box for the client to sign, confirming they're happy with the outlined statement of work and acknowledging that any changes to it will require an updated timeframe and budget.

Statement of work or a contract?

The business of motion design goes far beyond After Effects and animation programs. Our collection of business resources for motion designers are designed to help with the admin side of motion design, like making a motion design proposal, as well as helping with the creative side of things like how to write an explainer video script.

Browse our other After Effects scripts, templates, and presets:

Take a look at some of our other After Effects products on offer, or check out our business resources for motion designers section for a collection of items to help improve your animation and motion design business.

Can't find what you're looking for, or need something completely custom? Just send us an email here.